Constructed between 1817 and 1825, the original Erie Canal was an east-west waterway that stretched 363 miles across New York State, connecting the Hudson River in Albany to Lake Erie in Buffalo. Dug almost entirely by hand and animal power, the canal was an engineering marvel that used an innovative system of 83 locks to span more than a 560-foot change in elevation. A total of 18 aqueducts carried the canal over various bodies of water along its route, including the Genesee Aqueduct, which crossed the Genesee River in what is now downtown Rochester. The Second Genesee Aqueduct, built in 1842, still stands today and serves as the base of Rochester’s Broad Street Bridge.

The Erie Canal spurred the country’s first great westward migration and transformed Rochester from a small frontier village to a bustling center of commerce and activity. The Erie Canal was central to the growth of Rochester’s milling economy; in particular, its production of flour, which earned it the early nickname, Flour City. Along with economic growth, the canal brought an influx of people to and through the area, quadrupling the local population within its first 10 years of operation. And with new people came new ideas; the arrival of abolitionists, temperance workers, women’s rights advocates, and other social reformers helped establish Rochester’s reputation as a progressive-minded place. The explosion of people, ideas, products, and services made possible by the Erie Canal led to Rochester’s identity not only as the Flour City, but also the Young Lion of the West, and America’s first boomtown. 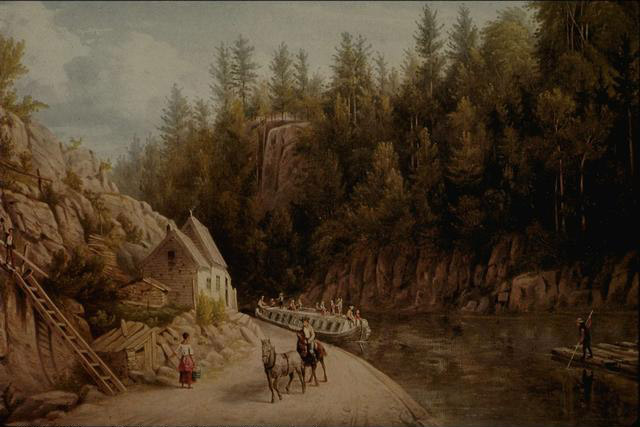