Rochester welcomed its first Latino residents in the late nineteenth century, but these initial migrants were few and far between. The local Latino community did not truly begin to grow until the 1940s, 50s, and 60s, when large numbers of Puerto Ricans, concerned about their island’s declining economy, began settling in the Rochester area. Their early employment opportunties were mostly in the surrounding counties as migrant farm workers on seasonal contracts. Those who eventually relocated to the city worked in a variety of fields, including the local food production and clothing industries.

These urban migrants rapidly formed tight-knit communities, or barrios, in neighborhoods such as Brown Square, Marketview Heights, and Upper Falls. Other Latino groups, including Cubans, Dominicans, and Mexicans, also settled in these areas.

Despite these setbacks, Rochester’s Latinos banded together to improve their situation. The 1960s ushered in the creation of Latino community centers, the addition of Spanish-speaking officers in the Rochester Police Department, and the formation of the Ibero-American Action League, an organization formed to address problems in employment, housing, and education.

Beyond improving their own situation, Latino migrants also made their mark on the greater Rochester community by importing their customs, culture, and culinary traditions. The local Latino influence remains visible through the restaurants and businesses along North Clinton Avenue (“La Avenida”), the music of groups like the Antonetti Orchestra (Orquesta Antonetti), and the annual Puerto Rican Festival.

In 2011, Dr. Isabel Córdova, Associate Professor in History & Political Science at Nazareth College, initiated a student project to record and preserve the oral histories of Latinos in the Rochester area. Her colleague in the Department of Foreign Languages and Literature, Dr. Hilda Chacon, contributed similar student projects to the collection. Shared with the Rochester Public Library and available here, the Latino Voices collection comprises 77 interviews of Rochesterians with roots in a variety of Latin-American countries, including Puerto Rico, Cuba, Mexico, Haiti, the Dominican Republic, Honduras, Costa Rica, and Colombia. The interviewees, whose stories span from the 1950s to the 2020s, have varying levels of connection to their Latino heritage, and each person gives a unique perspective on what it is like being a Latino-American in Rochester. 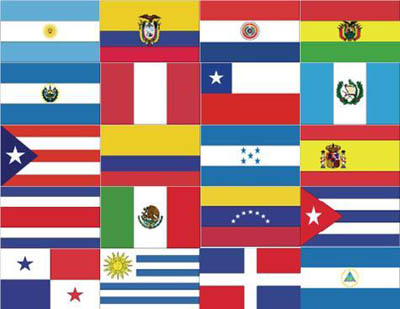