Born on December 5, 1839, in New Rumley, Ohio, George Armstrong Custer was a United States Army officer and cavalry commander during the Civil War and the American Indian Wars.

Custer entered the United States Military Academy at West Point in 1858. Graduating early due to the outbreak of the Civil War, he was called to serve with the Union Army in 1861. The war gave Custer the opportunity to prove himself as an effective leader and fearless fighter, a reputation that was later enhanced by his role in the American Indian Wars on the western frontier. He is perhaps best known for his “Last Stand” at the Battle of the Little Bighorn on June 25, 1876, when he led his regiment against a substantially larger Native American force. The battle resulted in a severe defeat for the U.S. Army, as well as Custer’s death.

An ambitious military leader, Custer sought fame; after his death, his widow, Elizabeth, whom he affectionately called “Libbie,” helped him to achieve it. She launched an extensive and effective campaign to advance Custer’s image as a war hero. The public began to view him as an exemplary officer who sacrificed his life for his country. His military career, especially his actions at Little Big Horn, has been studied extensively by historians.

During his travels throughout the country as an officer in the Army, Custer remained in contact with his relatives, including his cousin Augusta Frary, who resided in Canandaigua and Albion, New York. Custer’s letters to Frary provide a narrative of his adult life, including his time at West Point, his involvement in the Civil War, and his critical role in the Indian Wars. The George A. Custer collection contains this series of letters, some of which also detail Custer’s travels through Western New York. 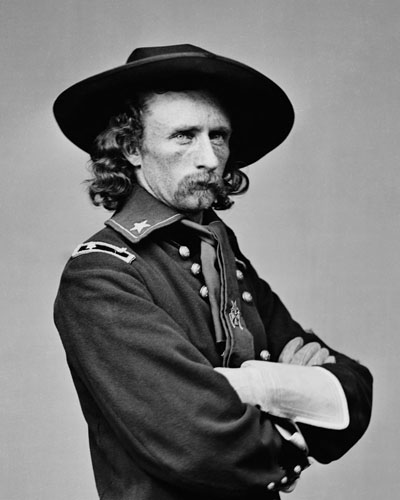