Known as “Rochester’s most decorated soldier,” Robert Noe Abbott (1915-1964) served in both the Second World War and Korea. He rose through the ranks of the U.S. Army from Private First Class to Lieutenant Colonel. Along the way, Abbott earned numerous awards and medals, including three Purple Hearts, the French Croix de Guerre, four Bronze Stars, two Silver Stars, and a Cross for Conspicuous Service.

Doubtlessly, the gravest challenge that Abbott faced during his military career came when he was captured by communist forces while serving on the front lines of the Korean War. After surviving 33 grueling months in Prisoner of War (POW) camps, Abbott returned to Rochester in September 1953, having become an ardent defender of America’s anti-communist interests in the Cold War. He devoted the remaining years of his life to this cause, accepting the position of Monroe County Director of Civil Defense. It was in this capacity that Abbott’s life came to an abrupt and tragic end. He died from injuries sustained from a helicopter crash while surveying Rochester’s racial uprising in July 1964.

Though cut short in its prime, Robert Abbott’s life is no less remarkable for its brevity. Thanks to a generous gift of archival material from his daughter, Roberta Abbott Buckle, the legacy and times of “Rochester’s most decorated solider” can be experienced firsthand. Explore this collection of photographs and documents, featuring telegrams, correspondence, military material, speeches, and newspaper articles, and enter the world of Robert Abbott!

Note: The materials presented here are a representative sample of the Robert N. Abbott Collection. To view the entire collection, visit the Local History and Genealogy Division of the Rochester Public Library. 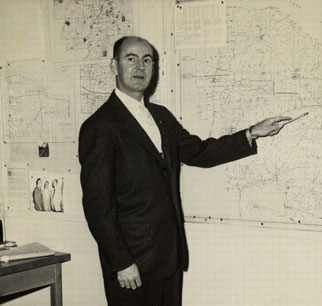