Susan Brownell Anthony (February 15, 1820 – March 13, 1906) was an American reformer and women’s rights activist. She supported a number of social and political causes, but is best known for her leadership in the woman suffrage movement.

Born in Adams, Massachusetts, Anthony was raised in a Quaker family that valued social justice. In 1845, she and her family moved to Rochester, NY, where she began work as a teacher and became involved in the temperance and abolition movements. Frustrated by the limitations placed on her because of her sex, Anthony attended her first women’s rights convention in 1852 and soon began a statewide campaign to gain women the right to vote.

Anthony continued to travel and lecture on behalf of women’s rights until her death in her Madison Street home on March 13, 1906. The 19th Amendment, which grants women the right to vote, was finally added to the United States Constitution in 1920. The amendment was named after Susan B. Anthony in recognition of her lifelong dedication to sexual equality.

The letters, documents, and other items seen here are part of the Susan B. Anthony Letters Collection. Many of the letters were written by Anthony to various friends, relatives, and officials. Others were written about Anthony and the suffrage movement. As a whole, the collection reveals the extent of Anthony’s leadership, intelligence, and commitment to equality. To view the entire collection, visit the Local History and Genealogy Division of the Rochester Public Library, or visit us online.

Explore the stories, letters, and other materials presented here and discover Susan B. Anthony for yourself! 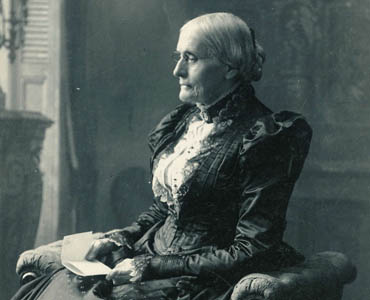