Letter, Susan B. to National Conference of Political and Social Reform

A letter from Susan B. Anthony, on behalf of the National American Woman Suffrage Association (NAWSA), to the National Conference of Political and Social Reform. Anthony explains how giving women the right to vote will increase national support for “the great moral and reform interests” and requests that the Conference pass a resolution in favor of woman suffrage. She also asks that the Conference’s officers sign a petition to Congress for a federal woman suffrage amendment. 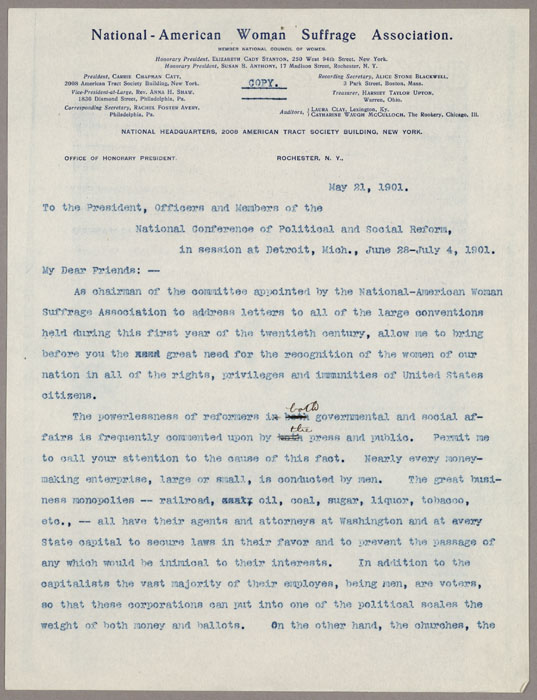 [page 1]
[Letterhead: National-American Woman Suffrage Association.]
May 21, 1901.
To the President, Officers and Members of the
National Conference of Political and Social Reform
in session at Detroit, Mich., June 28-July 4, 1901
My Dear Friends: –
As chairman of the committee appointed by the National-American Woman
Suffrage Association to address letters to all of the large conventions
held during this first year of the twentieth century, allow me to bring
before you the great need for the recognition of the women of our
nation in all of the rights, privileges and immunities of United States
citizens.
The powerlessness of reformers in both governmental and social af-
fairs is frequently commented upon by the press and public. Permit me
to call your attention to the cause of this fact. Nearly every money-
making enterprise, large or small, is owned and conducted by men. The great busi-
ness monopolies – railroad, oil, coal sugar, liquor, tobacco,
etc., – all have their agents and attorneys at Washington and at every
State capital to secure laws in their favor and to prevent the passage of
any which would be inimical to their interests. In addition to the
capitalists themselves the vast majority of their employes, being men, are voters,
so that these corporations can put into one of the political scales the
weight of both money and ballots. On the other hand, the churches, the 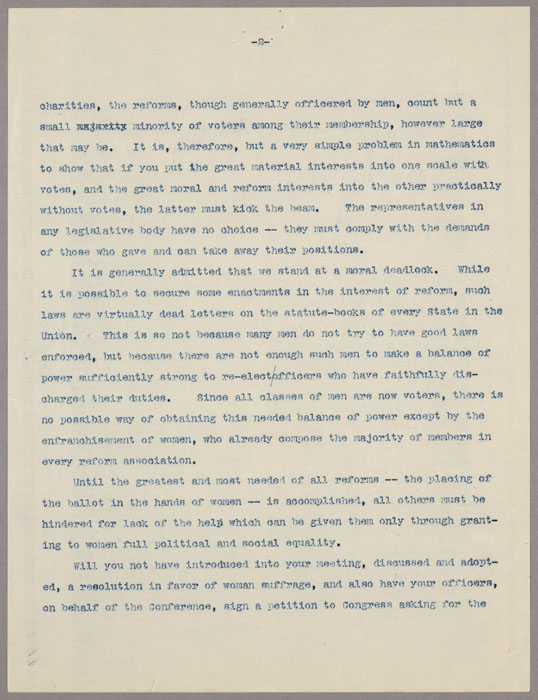 [page 2]
charities, the reforms, though generally officered by men, count but a
small minority of voters among their membership, however large
that may be. It is, therefore, but a very simple problem in mathematics
to show that if you put the great material interests into one scale with
votes, and the great moral and reform interests into the other practically
without votes, the latter must kick the beam. The representatives in
any legislative body have no alternative – they must comply with the demands
of those who gave and can take away their positions.
It is generally admitted that we stand at a moral deadlock. While
it is possible to secure some enactments in the interest of reform, such
laws are virtually dead letters on the statute-books of every State in the
Union. This is so not because many men not try to have good laws
enforced, but because there are not enough such men to make a balance of
power sufficiently strong to re-elect officers who have faithfully dis-
charged their duties. Since all classes of men are now voters, there is
no possible way of obtaining this needed balance of power except by the
enfranchisement of women, who already compose the majority of members in
every reform association.
Until the greatest and most needed of all reforms – the placing of
the ballot in the hands of women – is accomplished, all others must be
hindered for lack of the help which can be given them only through grant-
ing to women full political and social equality.
Will you not have introduced into your meeting, discussed and adopt-
ed, a resolution in favor of woman suffrage, and also have your officers,
on behalf of the Conference, sign a petition to Congress asking for the 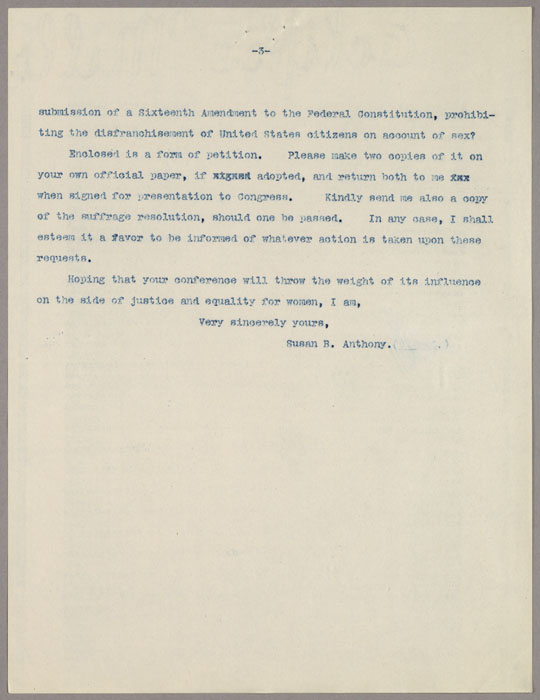 [page 3]
submission of a Sixteenth Amendment to the Federal Constitution, prohibi-
ting the disfranchisement of United States citizens on account of sex?
Enclosed is a form of petition. Please make two copies of it on
your own official paper, if adopted, and return both to me
when signed for presentation to Congress. Kindly send me also a copy
of the suffrage resolution, should one be passed. In any case, I shall
esteem it a favor to be informed of whatever action is taken upon these
requests.
Hoping that your Conference will throw the weight of its influence
on the side of justice and equality for women, I am,
Very sincerely yours,
Susan B. Anthony