A letter from George Armstrong Custer to his cousin Augusta Frary. Custer is staying at the Brunswick Hotel in New York City, and he details his recent trip up the East Coast from Washington, D.C. He notes that on the way, he stopped in Philadelphia, Pennsylvania, to view the grounds of the upcoming Centennial Exposition. He explains that his long-anticipated visit to Frary’s home in Albion, New York, must again be delayed, as he has been summoned to Washington as a witness in the impeachment trial of Secretary of War William Belknap. Custer discusses his urge to return to Fort Abraham Lincoln, on the Dakota frontier, where the United States Army is fighting Native Americans. 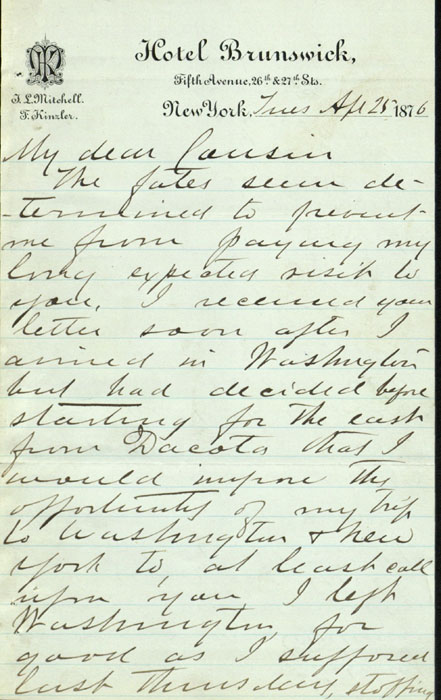 My dear Cousin
The fates seem de-
termined to prevent
me from paying my
long expected visit to
you. I received your
letter soon after I
arrived in Washington
but had decided before
starting for the east
from Dacota that I
would [illegible] the
opportunity of my trip
to Washington + New
York to, at least call
upon you. I left
Washington, for
good as I supposed
last Thursday, stopping 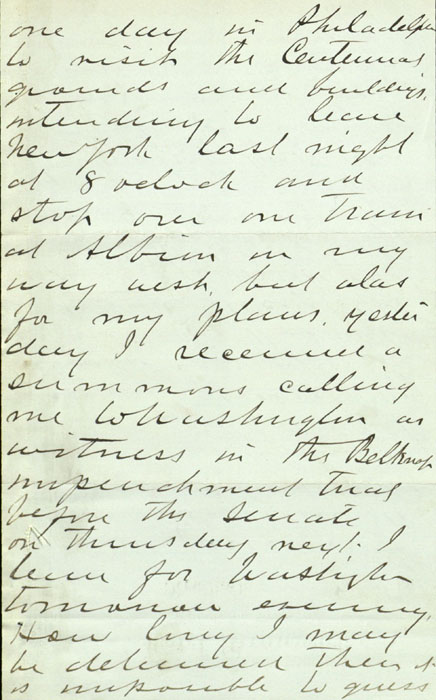 [page 2]
one day in Philadelphia
to visit the Centennial
grounds and buildings,
intending to leave
New York last night
at 8 oclock and
stop over on train
at Albion on my
way west, but alas
for my plans, yester
day I received a
summons calling
me to Washington as
witness in the Belknap
impeachment trial
before the Senate
on Thursday next. I
leave for Washington
tomorrow evening.
How long I may
Be detained there it
is impossible to guess 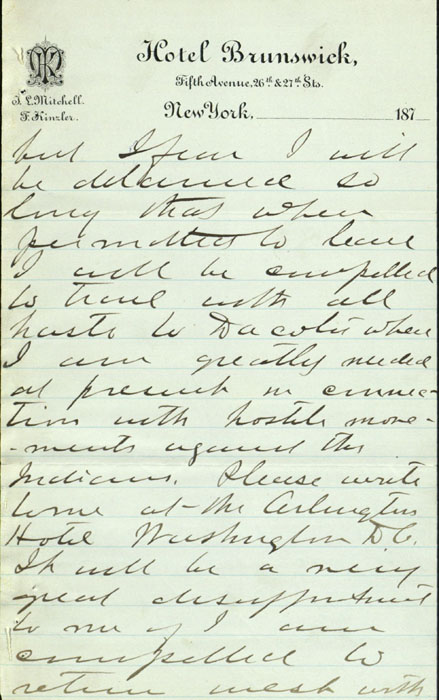 [page 3]
but I fear I will
be detained so
long that when
permitted to leave
I will be compelled
to travel with all
haste to Dacota where
I am greatly needed
at present in connec-
tion with hostile move-
-ments against the
Indians. Please write
to me at the Arlington
Hotel Washington D.C.
It will be a very
great disappointment
to me if I were
compelled to
return west with 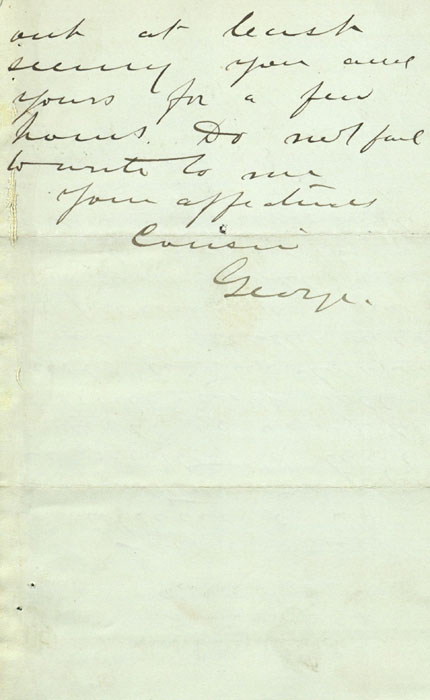 [page 4]
out at least
seeing you and
yours for a few
hours. Do not fail
to write to me
Your affectionate
Cousin
George.