A letter from George Armstrong Custer to his cousin Augusta Frary. Custer, having recently learned of his cousin’s new residence in Albion, New York, remembers traveling along the route between Rochester and Buffalo, likely passing near her new home many times. He further discusses his travels throughout New York State in recent years. He describes the rough and dangerous nature of living on the frontier at Fort Abraham Lincoln, in the Dakota Territory. Custer then provides an update on his family and explains the background of the family of his wife, Libbie, as her father was born and raised near Syracuse, New York. 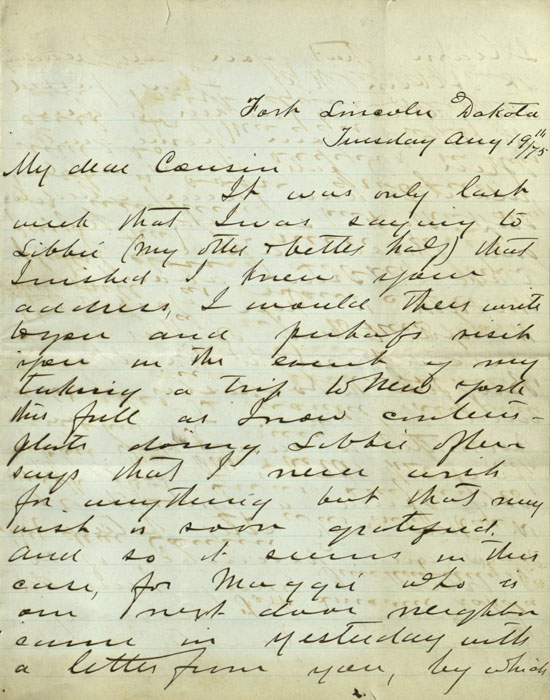 [page 1]
Fort Lincoln Dakota
Tuesday Aug 19th/75
My dear Cousin
It was only last
week that I was saying to
Libbie (my other + better half) that
I wished I knew your
address, I would then write
to you and perhaps visit
you in the event of my
taking a trip to New York
this fall as I now contem-
plate doing. Libbie often
says that I never wish
for anything but that my
wish is soon gratified.
And so it seems in this
case, for Maggie who is
our next door neighbor
came in yesterday with
a letter from you, by which 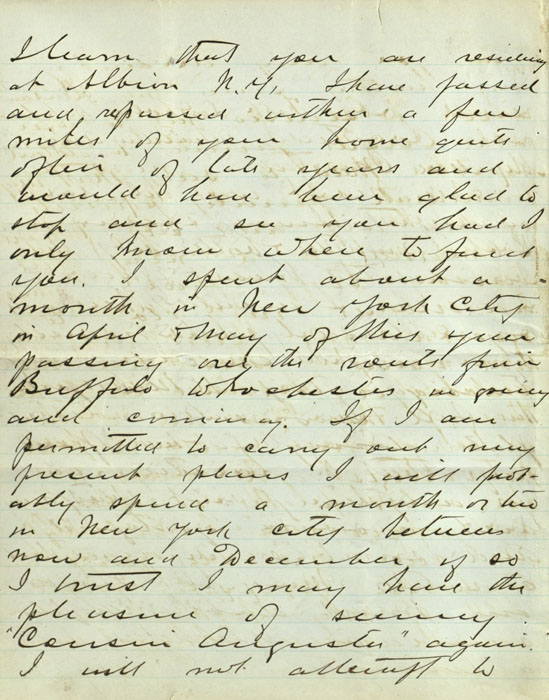 [page 2]
I learn that you are residing
at Albion N.Y. I have passed
and repassed within a few
miles of your home quite
often of late years and
would have been glad to
stop and see you had I
only known where to find
you. I spent about a
month in New York City
in April + May of this year
passing over the route from
Buffalo to Rochester in going
and coming. If I am
permitted to carry out my
present plans I will prob-
ably spend a month or two
in New York City between
now and December. if so
I trust I may have the
pleasure of seeing
“Cousin Augusta” again.
I will not attempt to 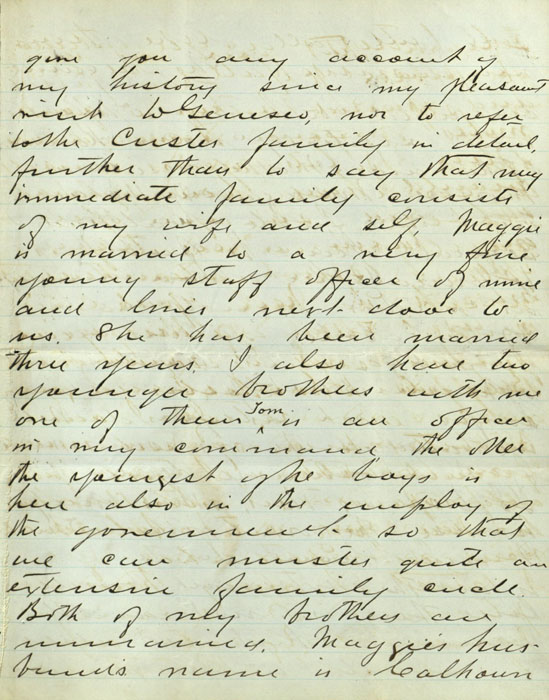 [page 3]
give you any account of
my history since my pleasant
visit to Geneseo, nor to refer
to the Custer family in detail,
further than to say that my
immediate family consists
of my wife and self, Maggie
is married to a very fine
young staff officer of mine
and lives next door to
us. She has been married
three years. I also have two
younger brothers with me
one of them ^Tom is an officer
in my command, the other
the youngest of the boys is
here also in the employ of
the government so that
we can muster quite an
extensive family circle.
Both of my brothers are
unmarried. Maggie’s hus-
band’s name is Calhoun 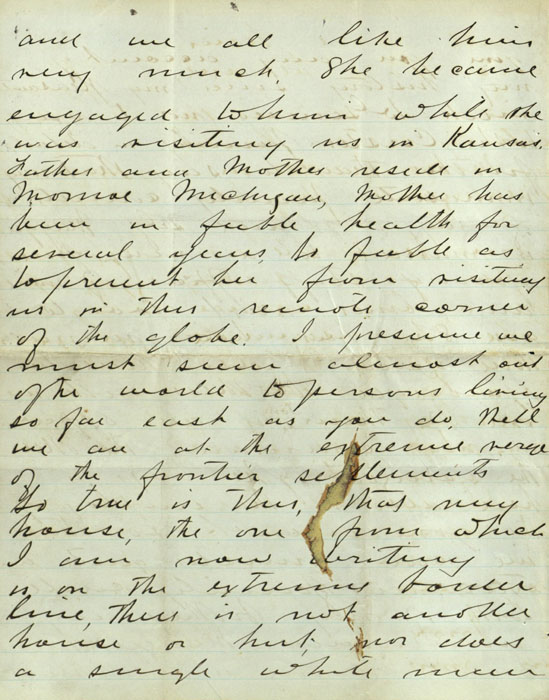 [page 4]
and we all like him
very much. She became
engaged to him while she
was visiting us in Kansas.
Father and Mother reside in
Monroe Michigan, Mother has
been in feeble health for
several years, so feeble as
to prevent her from visiting
us in this remote corner
of the globe. I presume we
must seem almost out
of the world to persons living
so far east as you do. Well
we are at the extreme verge
of the frontier settlements
So true is this, that my
house, the one from which
I am now writing
is on the extreme border
line, there is not another
house or hut, nor does
a single white man 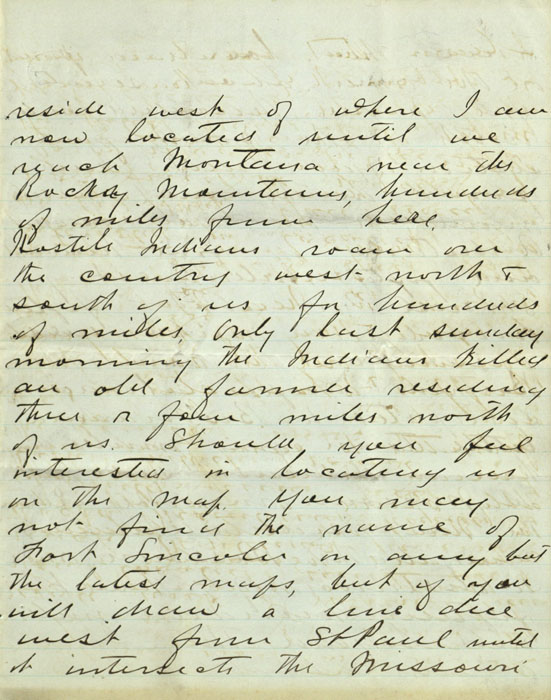 [page 5]
reside west of where I am
now located until we
reach Montana near the
Rocky Mountains, hundreds
of miles from here.
Hostile Indians roam over
the country west north +
south of us for hundreds
of miles. Only last Sunday
morning the Indians killed
an old farmer residing
three or four miles north
of us. Should you feel
interested in locating us
on the map, you may
not find the name of
Fort Lincoln on any but
the latest maps, but if you
will draw a line due
west from St Paul until
it intersects the Missouri 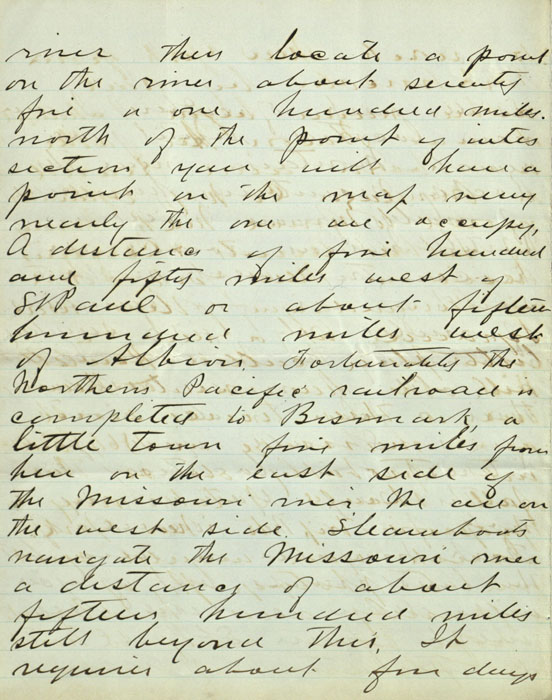 [page 6]
river then locate a point
on the river about seventy
five or one hundred miles
north of the point of inter
section you will have a
point on the map very
nearly the one we occupy,
A distance of five hundred
and fifty miles west of
St Paul or about fifteen
hundred miles west
of Albion. Fortunately the
Northern Pacific railroad is
completed to Bismark, a
little town five miles from
here on the east side of
the Missouri river. We are on
the west side. Steamboats
navigate the Missouri river
a distance of about
fifteen hundred miles
still beyond this. It
requires about five days 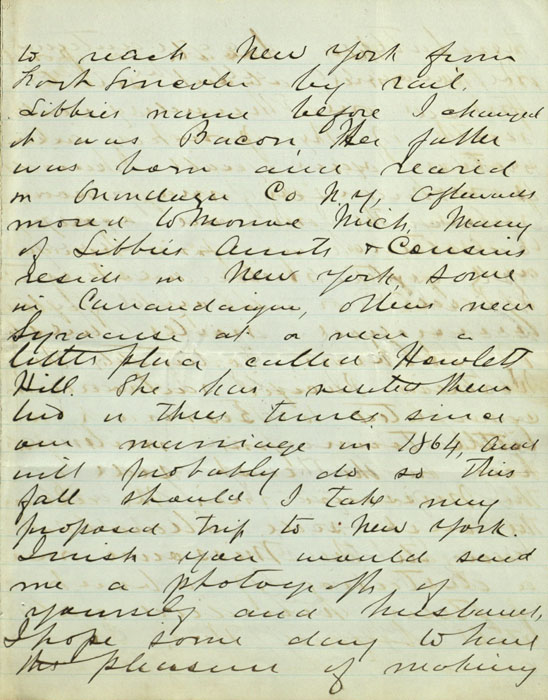 [page 7]
to reach New York from
Fort Lincoln by rail.
Libbies name before I changed
it was Bacon. Her father
was born and reared
in Onondaga Co N.Y. Afterwards
moved to Monroe Mich. Many
of Libbies Aunts + Cousins
reside in New York, some
in Canandaigua, others near
Syracuse at or near a
little place called Howlett
Hill. She has visited them
two or three times since
our marriage in 1864, and
will probably do so this
fall should I take my
proposed trip to New York.
I wish you would send
me a photograph of
yourself and husband,
I hope some day to have
the pleasure of making 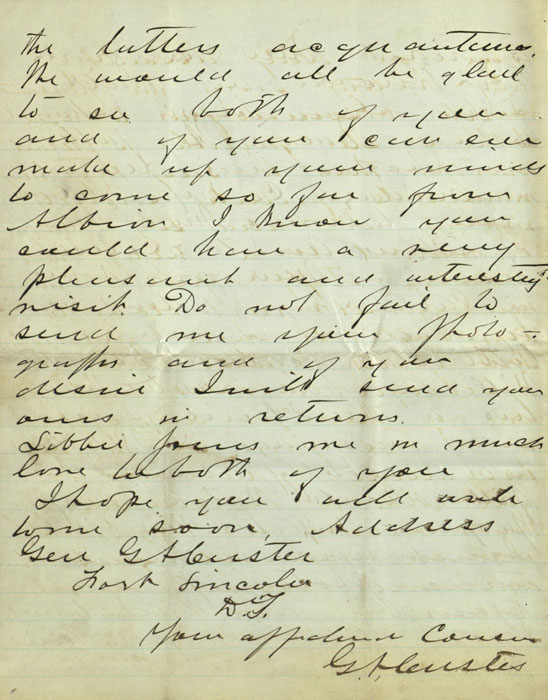 [page 8]
the latters acquaintance.
We would all be glad
to see both of you
and if you can ever
make up your minds
to come so far from
Albion I know you
could have a very
pleasant and interesting
visit. Do not fail to
send me your photo –
graphs and if you
desire I will send you
ours in return.
Libbie joins me in much
love to both of you
I hope you will write
to me soon,  Address
Gen GA Custer
Fort Lincoln
D.T.
Your affectionate Cousin
G.A. Custer