A letter from George Armstrong Custer to his cousin Augusta Frary. Custer thanks Frary for the photograph she sent to him, and sends two of his own, one of which includes his friend and captured Confederate officer, J.B. Washington. He discusses what might become of a fellow Union officer returning to the North after being wounded, and mentions a conference of Union Army generals from Washington, D.C. 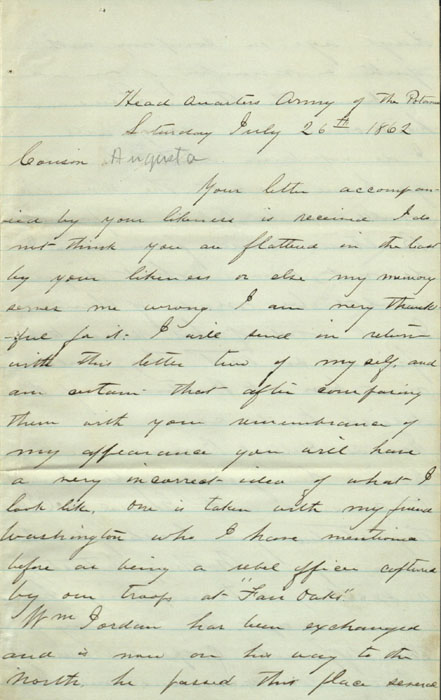 Cousin Augusta
Your letter accompan-
ied by your likeness is received. I do
not think you are flattered in the least
by your likeness or else my memory
serves me wrong. I am very thank-
ful for it. I will send in return
with this letter two of myself, and
am certain that after comparing
them with your remembrance of
my appearance you will have
a very incorrect idea of what I
look like. One is taken with my friend
Washington who I have mentioned
before as being a rebel officer captured
by our troops at “Fair Oaks.”
Wm Jordan has been exchanged
and is now on his way to the
North, he passed their place several 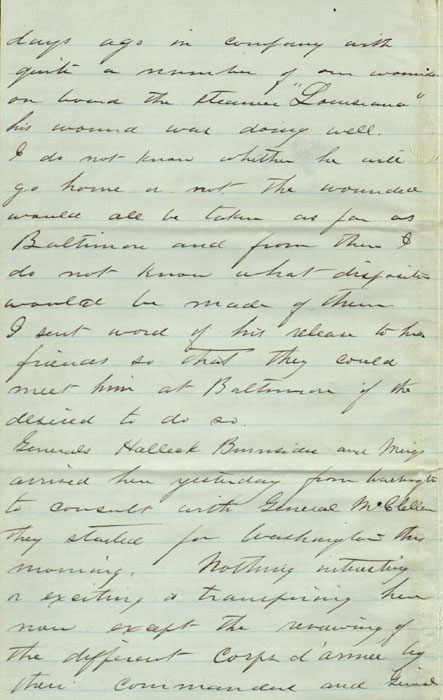 [page 2]
days ago in company with
quite a number of our wounded
on board the steamer “Louisiana”
his wound was doing well.
I do not know whether he will
go home or not, the wounded
would all be taken as far as
Baltimore and from there I
do not know what disposition
would be made of them.
I sent word of his release to his
friends so that they could
meet him at Baltimore if the
desired to do so.
Generals Halleck Burnside and Meigs
arrived here yesterday from Washington
to consult with General McClellan
they started for Washington this
morning.  Nothing interesting
or exciting is transpiring here
now except the reviewing of
the different Corp d’Armée by
their Commanders and General

[page 3]
McClellan.
“Everything is quiet along the
lines” and promises to be so for
a period.
I wish I could write
something to make my letter
interesting but I cannot.
Remember me to your parents
Ever Yours
George.