A letter to Kate Gleason from her father, William Gleason. William discusses business, his travel plans, his wife Ellen’s health, and his daughter Eleanor’s school experience while they are in Texas. 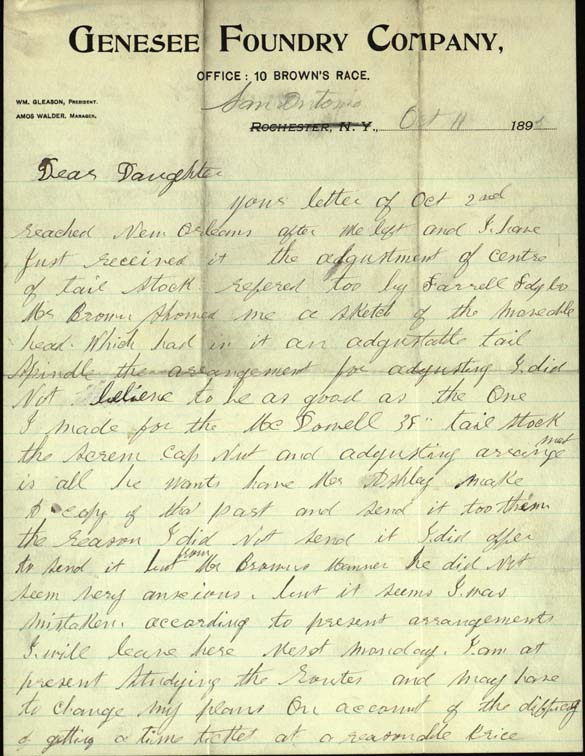 Dear Daughter
Your letter of Oct 2nd
reached New Orleans after we left and I have
just received it the adgustment of centre
of tail stock refered too by Farrell Fdy Co
Mr Brown showed me a sketch of the moveable
head which had in it an adgustable tail
spindle the arrangement for adgusting I did
not believe to be as good as the one
I made for the McDowell 38” tail stock
the screm cap nut and adgusting arrangement
is all he wants have Mr Ashley make
a copy of that part and send it too them
the reason I did not send it I did offer
to send it but from Mr Browns manner he did not
seem very anxious. but it seems I was
mistaken. according to present arrangements
I will leave here next Monday. I am at
present studying the routes and may have
to change my plans on account of the difficulty
of getting a time ticket at a reasonable price 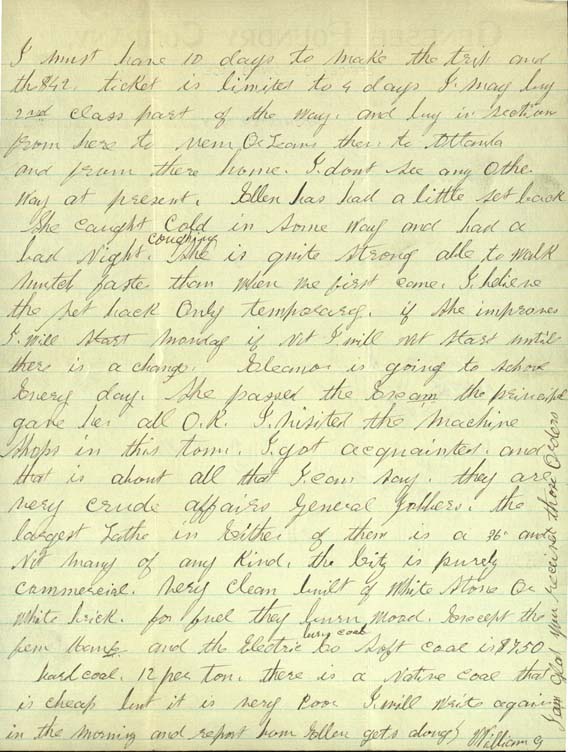 [page 2]
I must have 10 days to make the trip and
the $42. ticket is limited to 4 days I may buy
2nd class part of the way and buy in sections
from here to New Orleans then to Atlanta
and from there home. I dont see any other
way at present. Ellen has had a little set back
she caught cold in some way and had a
bad night coughing. She is quite strong able to walk
mutch faster than when we first came. I believe
the set back only temporary. if she improves
I will start Monday if not I will not start untill
there is a change. Eleanor is going to school
every day. She passed the exam the principal
gave her all O.K. I visited the machine
shops in this town. I got acquainted and
that is about all that I can say. they are
very crude affairs general jobbers. the
largest Lathe in either of them is a 36” and
not many of any kind. the city is purely
commercial. very clean built of white stone or
white brick. for fuel they burn wood. except the
few [illegible] and the Electric [illegible] Coal Co soft coal is $750
hard coal 12 per ton. there is a native coal that
is cheap but it is very poor I will write again
in the morning and report how Ellen gets along. William G

[side]
I am glad you received those orders