A letter from Kate Gleason to her brother, James Gleason. Kate provides Jim with information about Cornell fraternities and asks him to deliver a package to a friend. She reports that she has been running the family’s company by herself while their father has been traveling and tells Jim about a new social club that she has been asked to join. She asks if Jim has received the clothes she sent and suggests which Sage College girls he should meet. She briefly discusses the presidential election and whom their father intends to vote for. 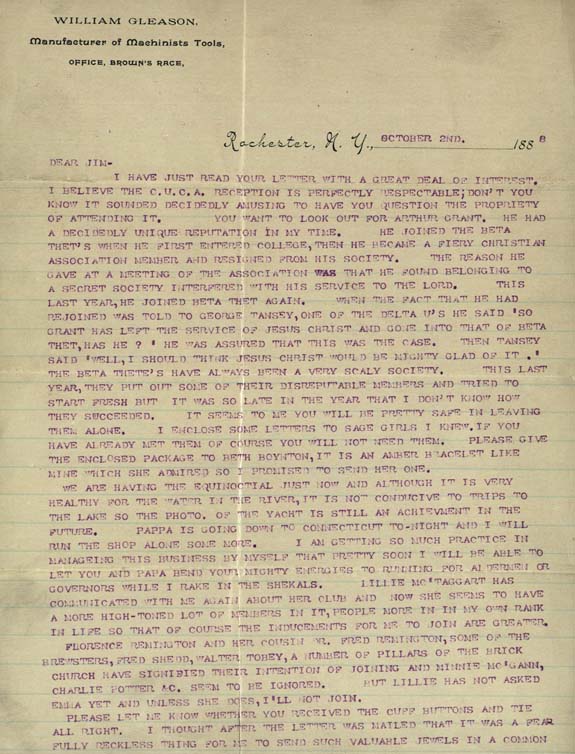 Rochester, N.Y., October 2nd. 1888
Dear Jim-
I have just read your letter with a great deal of interest.
I believe the C.U.C.A. reception is perfectly respectable; don’t you
know it sounded decidedly amusing to have you question the propriety
of attending it. You want to look out for Arthur Grant. He had
a decidedly unique reputation in my time. He joined the Beta
Thet’s when he first entered college, then he became a fiery Christian
Association member and resigned from his society. The reason he
gave at a meeting of the Association was that he found belonging to
a secret society interfered with his service to the Lord. This
last year, he joined Beta Thet again. When the fact that he had
rejoined was told to George Tansey, one of the Delta U’s he said ‘So
Grant has left the service of Jesus Christ and gone into that of Beta
Thet, has he?’ He was assured that this was the case. Then Tansey
said ‘Well, I should think Jesus Christ would be mighty glad of it.’
The Beta Thete’s have always been a very scaly society. This last
year, they put out some of their disreputable members and tried to
start fresh but it was so late in the year that I don’t know how
they succeeded. It seems to me you will be pretty safe in leaving
them alone. I enclose some letters to Sage girls I knew. If you
have already met them of course you will not need them. Please give
the enclosed package to Beth Boynton, it is an amber bracelet like
mine which she admired so I promised to send her one.
We are having the equinoctial just now and although it is very
healthy for the water in the river, it is not conducive to trips to
the lake so the photo. of the yacht is still an achievment in the
future. Pappa is going down to Connecticut to-night and I will
run the shop alone some more. I am getting so much practice in
manageing this business by myself that pretty soon I will be able to
let you and Papa bend your mighty energies to running for aldermen or
governors while I rake in the shekals. Lillie Mc’Taggart has
communicated with me again about her club and now she seems to have
a more high-toned lot of members in it, people more in in my own rank
in life so that of course the inducements for me to join are greater.
Florence Remington and her cousin Dr. Fred Remington, some of the
Brewsters, Fred Shedd, Walter Tobey, a number of pillars of the Brick
Church have signified their intention of joining and Minnie Mc’Gann,
Charlie Potter &c. seem to be ignored. But Lillie has not asked
Emma yet and unless she does, I’ll not join.
Please let me know whether you received the cuff buttons and tie
all right. I thought after the letter was mailed that it was a fear
fully reckless thing for me to send such valuable jewels in a common 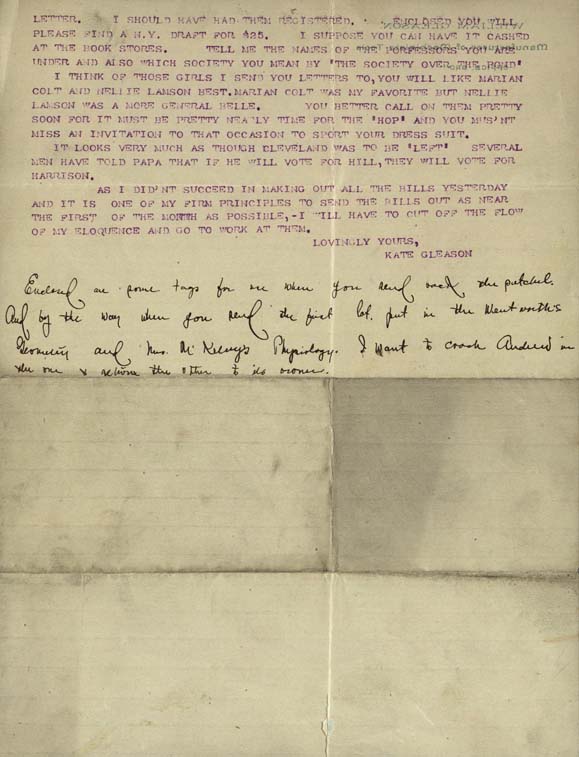 [page 2]
letter. I should have had them registered. Enclosed you will
please find a N.Y. draft for $25. I suppose you can have it cashed
at the book stores. Tell me the names of the professors you are
under and also which society you mean by ‘the society over the pond’
I think of those girls I send you letters to, you will like Marian
Colt and Nellie Lamson best. Marian Colt was my favorite but Nellie
Lamson was a more general belle. You better call on them pretty
soon for it must be pretty nearly time for the ‘hop’ and you mus’nt
miss an invitation to that occasion to sport your dress suit.
It looks very much as though Cleveland was to be ‘left’ Several
men have told Papa that if he will vote for Hill, they will vote for
Harrison.
As I did’nt succeed in making out all the bills yesterday
and it is one of my firm principles to send the bills out as near
the first of the month as possible,-I will have to cut off the flow
of my eloquence and go to work at them.
Lovingly Yours,
Kate Gleason

Enclosed are some tags for use when you send back the satchel.
And by the way when you send the first lot, put in the Wentworth’s
Geometry and Mrs. Mc’Kelvey’s Physiology. I want to coach Andrew in
the one and return the other to its owner.