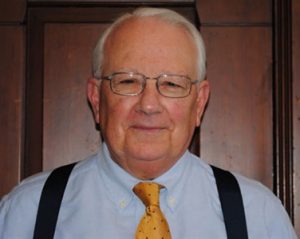 Thomas Richards (b. 1943) was born in Danville, Pennsylvania, and moved with his family to Rochester, New York, when he was young. His father was a Baptist minister and served as an Army chaplain during the Second World War. Richards graduated from Brighton High School and attended Bucknell University, graduating in 1965 with a degree in political science and education. He enlisted in the United States Navy and attended Officer Candidate School. He completed basic training in 1966 and traveled between San Diego, California, and the Philippines on a ship for about two years, gathering electronic intelligence. He was then trained in the Swift Boat program and sent to Vietnam to patrol rivers for a year. After being honorably discharged from the Navy in 1969, Richards attended Cornell Law School. He practiced law in Rochester for many years before going to work for Rochester Gas and Electric, eventually becoming chairman, president, and chief executive officer of RG&E’s parent company, RGS Energy Group. Richards served as corporation counsel for the City of Rochester from 2006 to 2010. He was appointed deputy mayor of the city in 2010 and served as the 66th Mayor of Rochester from 2011-2013.

In this interview, Richards discusses his experience in Vietnam and his perspective on the war. Richards says that the majority of his time in the Navy felt like an adventure and was relatively safe because he was either on base or on a ship. He recalls that the people he met in Vietnam were friendly and grateful for the supplies Americans brought. He notes that he was lucky not to be hurt, though he saw many people injured in combat. Richards says that when he was in college, the civil rights movement was much more prominent to him than the Vietnam War and that he did not pay much attention to the war until he was in the Navy. He notes that once he was in Vietnam, it took him three months to realize that the war was a waste of time. He feels that overall the war was a good experience for him, but one from which he has moved on. While he has been active in Veterans’ Outreach, Richards has ultimately chosen not to participate in other veteran’s groups.